We watch TV programs almost everyday. All we know is turning on our TVs and perhaps also set-top-box. Then, TV programs come right in. Our topic today is a general overview on how TV programs are being transmitted to our TVs.

Besides traditional antenna broadcasting in either analog or digital form, TV stations have 3 more channels to distribute programs. They are satellite, IPTV and Cable Television. The only difference is the media that signals pass through.

TV stations send programs to an uplink facility for transmitting signals via uplink satellite dish. Then the signals go up to space radio station or so-called DVB satellite and re-transmitted back down the earth. A hyperbolic shape reflector antenna picks up the signal and send it to satellite set-up box or tuner, which is connected to our TV. This broadcasting scheme is suitable for areas where it is hard for IPTV, Cable TV and traditional antenna broadcasting to reach. Examples of satellite TV providers are DirectTV and DiSH network.

However, there is downfall on this transmission method:

As its name applies, IPTV (aka Media On Demand or Video On Demand) programs are transmitted through Internet traffic. Usually, your ISP handles the service along with Internet access and IP phone as a package deal, known as Triple Play. Major TV channels are transmitted from TV station to ISP so are some of the satellite TV channels. Then, ISP relays TV programs right to your door. How do you watch these programs? You hook up a VOD(video on demand) set-up box to your ADSL or fiber optic modem via RJ45, and there is another HDMI cable between the set-up box to your TV. IPTV is usually readily available as long as you have Internet subscription at home. Examples are Google Fiber and Movistar TV. 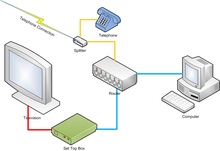 Since ISP is collecting a lot of Full-HD programs, IPTV covers a wide range of TV channels in 1920x1080p. Typically, ISP will provide all gadgets you need to watch TV once the set-up box is hooked up to both network and your TV.

IPTV offers advantages that satellite TV does not:

Cable Television has been around for decades since 1940s. Like ISP, cable television service providers collect TV channels from various TV stations and broadcast signals to subscribers. It used to be analog RF signals and video quality was low. After year of 2000, TV broadcasting system gradually evolves into digital form around the globe. TV resolution is going up to 1920x1080p and more channels join the network. Examples are: Comcast Cable and Charter Communications.

Seemingly, today’s IPTV and cable television services are similar but there is still difference: